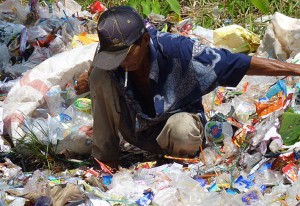 Sorting through plastic garbage, an open dump on a school ground in Banjarmasin, South Kalimantan, November 2012.

It has been quiet here of late. I have been working on the resource material for the UNESCO Green School Action Project for Climate Change Education. The pilot for this project is being conducted in Banjarmasin, the capital of the Province of South Kalimantan on Borneo in Indonesia. The outcome is a teachers’ guide for innovative classroom lessons for upper primary and lower secondary schools, that is for Years 5-8. The themes covered include biodiversity, forest, water, waste and energy.

The UNESCO Climate Change Education program is embedded in the international agenda for Education for Sustainable Development (ESD). From academics and practitioners, there has been some considerable criticism of ESD. For once, sustainable development is considered an oxymoron and one of the main flaws of this concept is that it denies the natural environment and its inhabitants intrinsic value (for a more detailed critique see Selby in Gray-Donald and Selby 2008, 59-75). The far reaching and catastrophic consequences of climate change, its complexities and interconnectedness of human and natural systems confronts us with more urgency than ever to give equal consideration to human and non-human animals. In fact, giving non-human animals a voice will result in better outcomes for all. Developing as well as applying the teaching and learning resources for climate change education, it has to be a deliberate and conscious choice to incorporate both perspectives and I give some examples of trying to achieve this below.

The content of the themes has been organised in a way that helps the students to understand how we humans and all non-human animals depend on the natural world, how our lives are interlinked with the lives of non-human animals, why we need to protect the health, diversity and resilience of the natural world, how climate change threatens the bases of our life support systems and livelihoods, and how we contribute to climate change and the lack of resilience of the natural world. Teachers and students alike learn about the interrelationships between the five themes: Biodiversity, forest and our water sources are impacted on by climate change to a degree that the entire living and non-living environment, our natural support systems, and our livelihoods are under threat. In turn, the degradation of our natural support systems and the loss of their resilience make them increasingly vulnerable to climate change and reduce their ability to ameliorate the effects of this impact. Waste and pollution as a consequence of our current dominant ways of extracting, producing and consuming things contribute significantly to climate change and to the declining health of the natural environment and its inhabitants. Finally, the production and consumption of energy based on fossil fuels is recognised as the primary driver of climate change. As a consequence, climate change undermines social and environmental justice, environmental sustainability, and peace and security.

Most importantly, students are guided through a learning process that allows them to discover what it is they can do within their own lives, at school, at home and in their communities at large to protect and enhance the natural environment, the many steps they can take along the way toward zero-waste and zero-carbon emission lifestyles, and how to inspire and engage others to be part of this. The action projects can range from personal commitments in their day-to-day lives to larger and longer term activities involving their community.

Learning about waste on first sight does not seem as ‘sexy’ as learning about biodiversity or forest. And in the context of learning about climate change, we find that globally, the waste sector as such contributes comparatively little in a direct way, that is about 3-5% of greenhouse gas emissions, mainly through waste treatment and disposal. While this does not seem much, preventing waste in the first place and recovery of wastes avoids emissions in all other sectors of the economy. Importantly, it will also avoid and reduce toxic pollution. Zero waste approaches, but also waste reduction approaches will have big impacts in terms of reducing greenhouse gas emissions in the energy, forestry, agriculture, mining, transport and manufacturing sectors (UNEP 2010). This context adds a level of complexity to student learning which will train systems thinking skills. 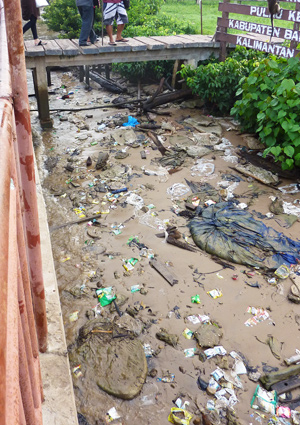 Garbage in the wetlands of Monkey Island, South Kalimantan

In Indonesia, waste is a problem that really is ‘in your face’. Until 2008, there was no waste management law in place. Now, government statistics say that 50-60% of waste in municipalities is collected. But it is mostly deposited in open, gas emitting and leaching pits, and explosions and landslides after heavy rainfalls causing death, injury and toxic pollution are not uncommon. Collecting 50-60% also means there is a lot left to the communities to deal with themselves. While I was in Banjarmasin as part of this project, waste piles were to be seen by the side of every road and on some school grounds, at river banks and every other public outdoor space. Out on the Martapura River and on Monkey Island, waste washes up on the river banks and in the wetlands, and I watch people constantly drop their litter, even into the seemingly pristine forest creek. It’s just the normal thing to do.

What is interesting about learning and teaching about waste is that its impact on animals and the environment, and on us, are often very graphic and visually confronting and so become very tangible.

In my background research for the theme waste, I came across the work of Chris Jordan. Chris documented with photographs and on film what happens to the colony of albatrosses on Midway Atoll in the North Pacific Ocean. This atoll is more than 2000 miles from the nearest continent. The nesting chicks of this far-away part of the world are fed large amounts of plastic trash by their parents, who mistake it for food as they forage over the Pacific Ocean. Chris Jordan’s work visualises a clear link between our day-to-day actions and makes the consequences tangible.

MIDWAY : trailer : a film by Chris Jordan from Midway on Vimeo.

In Australia, Australian Seabird Rescue documented such impact on sea turtles. Rochelle Ferris explains that “around 40% of the sea turtles we treat in our sea turtle hospital each year are suffering the effects of plastic ingestion in varying degrees. The most shocking case of plastic ingestion by a sea turtle we’ve seen washed up in June 2011. 317 pieces of plastic were retrieved from the digestive tract of the carcass.” She adds that turtles are found to have eaten most plastic items, but the most common items are soft plastics, such as plastic bags and lolly wrappers, and pieces of hard broken-down plastic. Rochelle concludes a report by ABC North Coast NSW saying that “if we do control this marine debris issue, I’ll be out of work. But I’d like to be doing something that doesn’t break my heart every day.”

When being confronted with such realities, it is important to work with the students on what can be done about this. For example, the learning process of the theme waste involves the treatment of four topics, with one to two activities under each topic.

Topic 1: What is Waste and why is it a Problem? Here, one of the activities involves leaving the classroom and conducting a waste survey of their school or their neighbourhood. The students will find out how waste affects their local environment. They will also learn that waste is produced along the chain of extracting, producing, distributing, consuming and disposing of things, and they will learn about plastics in the ocean as a specific problem and what can be done about it. Excellent resources that can be used for all age groups, young people as well as grown-ups, are the Story of Stuff with Annie Leonnard and My Plastic-free Life with Beth Terry.

Topic 2: Waste and Consumption. Under this topic, students will develop an understanding of the connection between consumerism and waste, the difference between needs and wants, and they will learn about the role of media and advertising as a driver of consumption.

Topic 3: Future Problem Solving for Zero Waste. The students are guided along a six-step process of the future-problem solving strategy to identify possible causes and effects of a growing open waste dump in the community. They identify what the main problems are, they develop potential solutions and an action plan to solve the problem.

Topic 4: Personal and Community Action for Zero Waste. Students develop action project plans and implement a project to bring about real change, no matter how big or small, whether it be a pledge for personal action or a community project to clean up a stretch of the river bank and educate and inform their community about the needs for action. Being involved in action projects, students potentially acquire skills in making better decisions and changing behaviour to avoid waste where possible, to reduce, reuse and recycle, skills in action competence, in inspiring and involving others, be it family members or friends or their wider community, they acquire the ability to practice alternative actions in order to avoid waste which in turn is expected to further strengthen their attitudes and values.

During my visit to Banjarmasin, UNESCO opened a new Teacher Training Centre as part of their Green School Program. For that occasion, schools participating in the program were invited to take part in a T-shirt design contest. From the 20 entries, the design that touched me most depicts a tree under which animals congregate – has a deliberate and conscious choice been made or was it intuition?

It was heartening to meet so many enthusiastic, optimistic and hopeful young teacher trainees hungry for knowledge, wanting to find out what people in other countries are doing and wanting to create a better future for their own. But I have also met some experienced teachers who feel very disillusioned and powerless in the face of the resource exploitation and lack of trust that the right thing is being done by their country, by the people, the animals and the environment as a whole. I hope the material has something in it to assist all of them, to find optimism and inspiration. The final manuscript will be in two parts and contains some 400 pages of resource material. I would love to hear how the teachers make use of it, how the students respond, what they get passionate about and what projects they come up with…